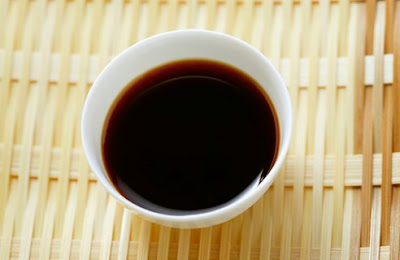 Okay, so you may have noticed several of my recipes involve soy sauce in the marinades and sauces. Technically, made from soy beans (a legume) and usually containing wheat (eek!) soy sauce is a no-no on a paleo plan.

1. Small amounts - first off, the amount of soy sauce that I use is generally 1 or maybe 2 TB, spread into a recipe yielding several servings. I try not to get to worked up about the teeny tiny amounts of the substances that make their way into my food. I would spend time stressing about whether every pieces of meat I ate was pastured/grass finished before I would hyperventilate about whether that 1 TB of soy sauce had trace amount of wheat in it.
2. Fermentation - Soy sauce is made from fermented soy beans and it is this process that neutralizes many of the bad stuff in soy beans. A couple thousand years ago in asia people figured out that if they fermented their beans and grains first, everybody seemed to get less sick from eating them.
3. Wheat Free Options - If you are seriously gluten intolerant, there are wheat free options such as this one from VH sauces.
4. Get the good stuff - Cheaper options are usually made from hydrolyzed soy protein instead of brewing and fermenting naturally. The resultant product is not the same dark color as real soy sauce and so this liquid is then colored with caramel coloring. Check the ingredient label and look for simple, pronounceable, non-chemical ingredients.
at 5:58 PM